The Island of Korean Wonder Women

The island of Jeju is more popular with Koreans and, recently, Chinese tourists, than it is with anyone else. Other foreigners tend to stick to Seoul, the DMZ, and other, more known quantities in this still quite new – for us – tourist destination. For the moment, Jeju remains a bit of a mystery.

This moment will not last long.

Jeju, sometimes called Korea’s Hawaii, is a small island off the south coast that has its own temperate microclimate, meaning it never gets too hot, or very cold. With beaches and sunlight and tropical fruit and the highest mountain in South Korea, a dormant volcano called Mt. Halla (just under 2,000m), there are ample attractions. 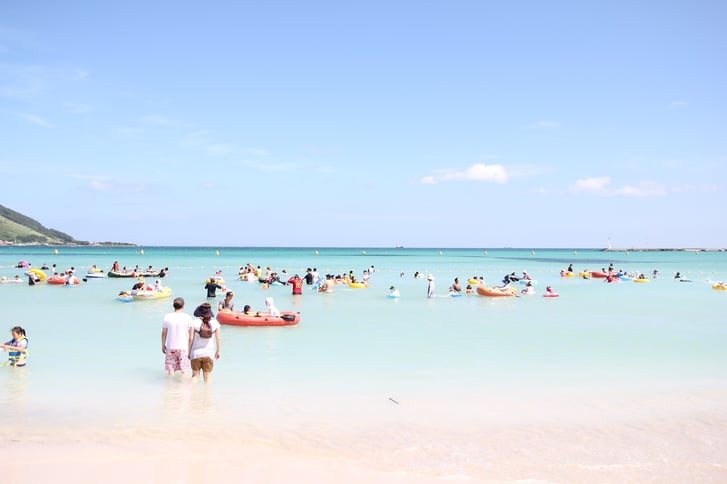 One of Jeju's beautiful beaches

In fact, there’s so much on the island that it’s also known in Korean as Samda-do, or the island of three abundances. Those abundances are wind, stone, and women.

Though wind and rocks are fine things for an island to have an abundance of, it’s that last one that will probably to the trick for opening Jeju up to the rest of the world.

At various points in its history, the abundance of women would have been a selling point for interested men. But it’s the reason for this abundance, and the results of it, that are of more modern and perhaps enduring interest.

Over dozens of generations, men have gone out to sea from Jeju’s small villages to fish and, due largely to that abundance of wind, not returned. The result has been a society that relies heavily on its women.

Most famous are the haenyeo, the women divers (literally “sea women”). 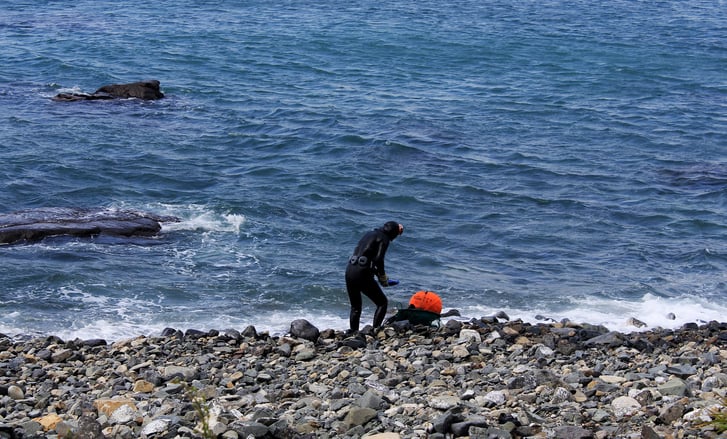 A diver prepares to enter the sea to fish

Though not as plentiful as they were in the years before tourism outstripped fishing as a means of support – the New York Times figures the number’s down below 4,500 from 26,000 in the 1960s -- you can still see lines of white-kerchiefed women filing to the coast, and out onto their floating platforms, called taewak, to dive as much as 20m using only a rope, flippers, and their well-trained lungs to fish for abalone and conch.

But they’re just one aspect of this gynocentric island. Perhaps more significant still is the fact that, in the middle of what remains a basically patriarchal Korean society, most of the chief religious figures on Jeju are also women.

Though various forms of Buddhism and Christianity are popular here as in the rest of the country, Muism plays a big role. 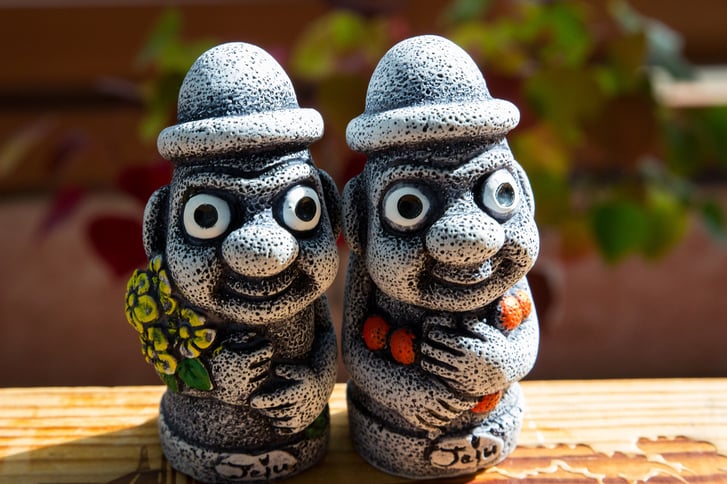 The essentially shamanistic indigenous religion recognizes as many as 18,000 gods resident on the island, and unlike Buddhism, Christianity, and Confucianism, whose rituals are largely performed by men, Muism, also known as Sinism Singyo, or the religion of the Shin gods, is firmly centred on women.

The rituals, known as gut, are performed around the island at open-air, natural temples or holy sites, known as dang, usually associated with a cave, boulder or ancient tree.

One major holy day, Tamnaguk Ipchungut, has been celebrated every year in February since the time of the Jeju-based Tamna Kingdom, an era that ended in 1404, and was established at least as early as the 1st century CE.

It welcomes the coming of Spring, and serves roughly the same purpose as New Year’s does in much of the rest of Asia and in most European traditions, looking forward to the future, making wishes and resolutions, along with prayers for good harvests. 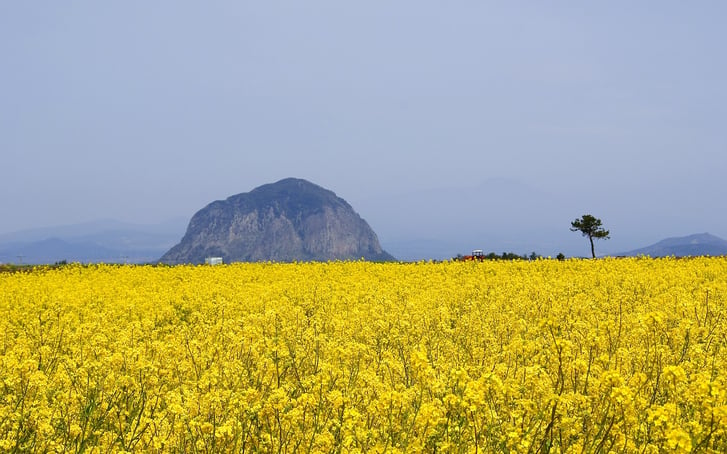 Though once practices mostly in the home, many of these rites are now held in public places, open to believers and tourists alike.

Like Hainan, a similar sort of island off the south coast of China, Jeju is culturally distinct from the rest of the country. This can be fascinating to delve into, but it also provides some pretty good shopping options, too.

This is about the only place you can get a garot (or galot), for instance, a traditional working outfit died with unripe persimmons which give it an antimicrobial property that means you don’t need to use detergent to wash it. 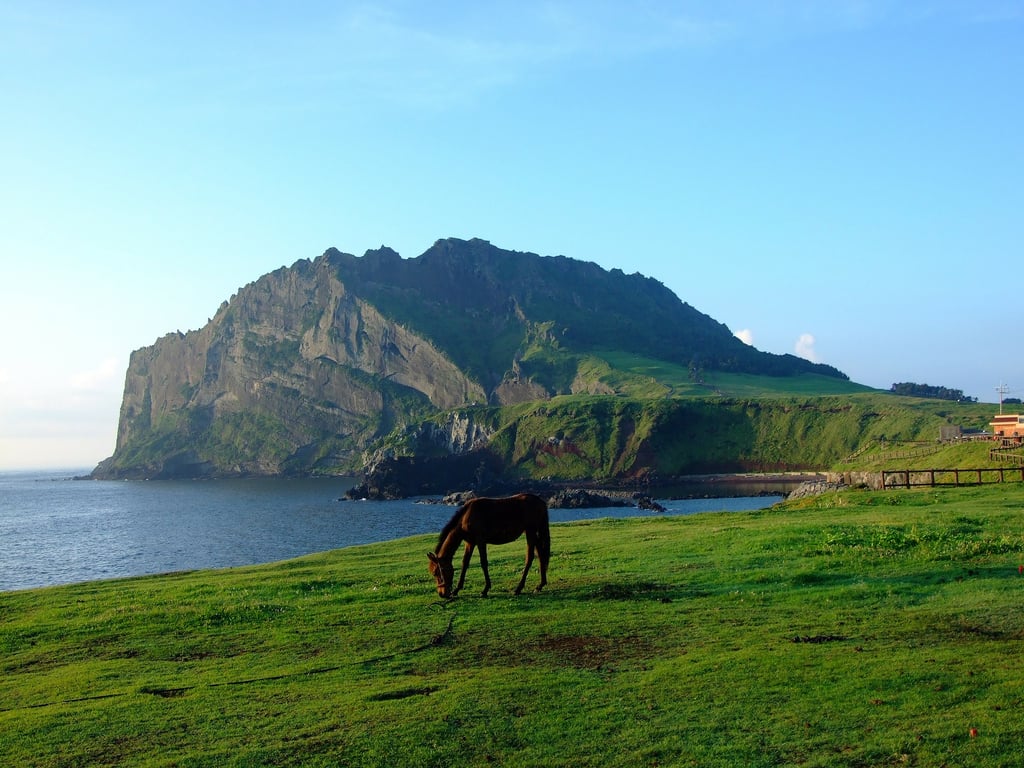 A horse grazing on Jeju island

Jeju is also home to the Jeju horse, a protected breed that’s been on the island in one form or other since the stone age.

Tthe island has also been the favourite honeymoon spot for Koreans for years, leading to the establishment of honeymoon-specific hotels and services all over the island, but particularly concentrated in and around Jeju City.

In addition to providing some entertaining hotel room options, it can be lovely to take a stroll on the Olle Trail, for instance, or down into the 8km-long Manjanggul lava tube, and be surrounded by young couples who have been looking forward to this trip for years.

There is no shortage of things to do and see on this fascinating island...why not check it out for yourself?