The Almost-Forgotten Heart of Germany

Few nations are as aware of just how slowly old wounds heal as Germany. And though they deal daily and well with the legacy of the 1930s and 40s, there’s another, more recent scar – less apocalyptic but just as durable – that Germany and the rest of the world are only now starting to get over. The Iron Curtain fell especially hard on Germany, and the bit that fell behind it joined Bulgaria, Romania, Hungary, and the rest, cut off from most of the rest of the world for decades.

The result, even though the curtain was raised more than a quarter century ago, is that while the UK France, Italy, the Netherlands, and much of the rest of Western Europe – including the former West Germany – have benefited from the huge increase in casual travel brought about by historically low air- and cruise fares, the former Eastern Bloc remains in the shadows. Not mysterious exactly, but less familiar, less part of the West’s touristic literacy. 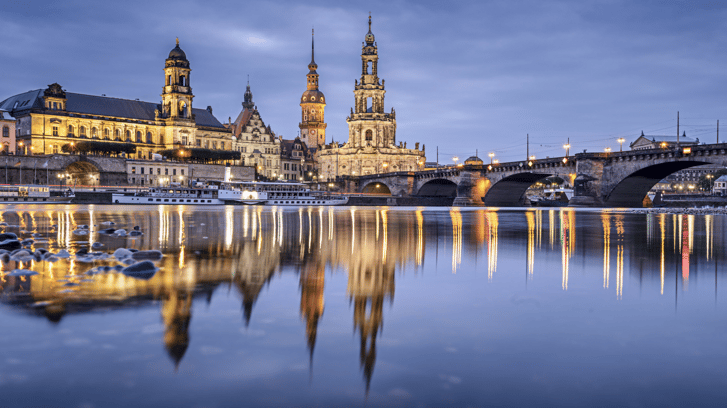 The irony is that the former East Germany – the part with Brandenburg and Magdeburg, Wittenberg and Meissen -- is also the former centre of the German Empire, the place where Germany ceased to be a loose collection of principalities and margraviates and became Germany. Though the Danube (the Donau in German) is familiar to anyone who’s taken a river cruise or waltzed, the Elbe is really Germany’s great river, along which everything that made Germany German happened, from the 10th century onwards. 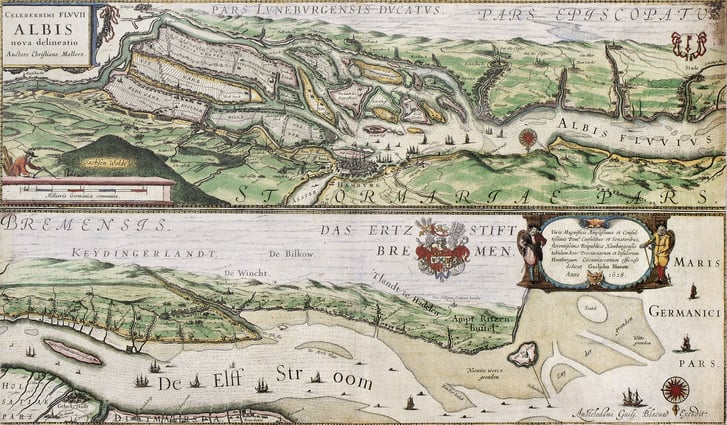 It all started in Brandenburg, whose castle was a Slavic fortress until Henry the Fowler (Heinrich der Finkler) won it from them in 929. Henry’s son, Otto, became Otto I (and later Otto the Great), the man who is seen as the father of the fatherland. Though the castle’s long gone, the Dom St. Peter und Paul on Dom Insel dates from just a couple of hundred years later (begun in 1165 and finished about two hundred years later).

It’s home to the Wagner Organ, one of the most historically significant in the world (and named for its maker, Joachim Wagner -- who also built the grand organ in Trondheim, Norway, for those who have taken the Hurtigruten tour -- not the 19th century composer). A few hundred metres away is the Dommuseum, with its important collection of liturgical garments dating back to the 13th century.

Though Henry and Otto moved on, Brandenburg – which actually lies on a tributary of the Elbe called the Havel -- became increasingly important, ultimately becoming the centre of the Kingdom of Prussia. Its significance eclipsed nearby Berlin’s for much of its history, a fact recognized by the prominence of the gateway to the city in the middle of Berlin. 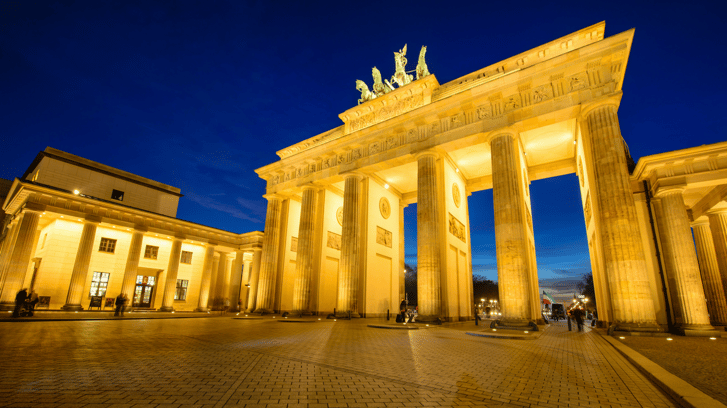 The Brandenburg Gate in Berlin

Downriver from Brandenburg in Magdeburg, historically important for being the place where both Henry and his son Otto died, 37 years apart, and where Otto is buried, in Magdeburg Cathedral, beside his first, British wife. Founded by Charlemagne the previous century, the city’s central medieval importance – it was one of the biggest cities in the Holy Roman Empire -- is highlighted in the Museum of Cultural History (where you can see the oldest equestrian statue north of the alps, the Magdeburger Reiter). 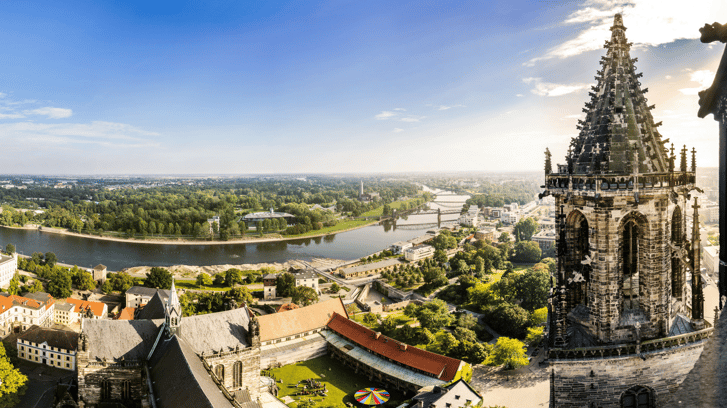 The Elbe from Madgeburg Cathedral

Martin Luther went to school here in the late 15th century and came back a few decades later to preach the new Protestantism. (Magdeburg was also the birthplace, a few centuries later, of Karl Wallenda, the founder of The Flying Wallendas.) 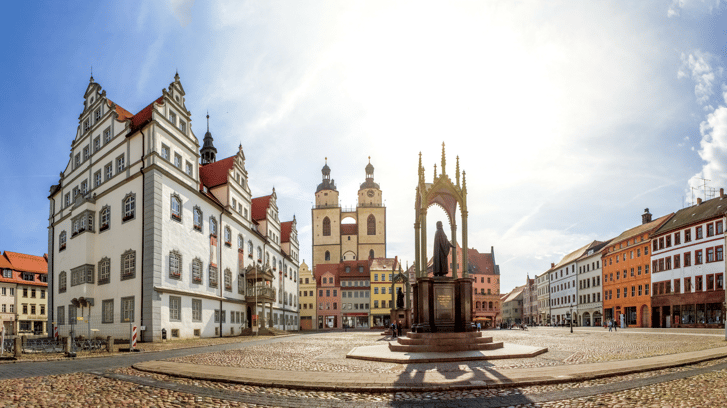 It wasn’t too far from Magdeburg, just 85km east, in fact, that Luther nailed those 95 theses to the doors to the All Saints’ Church in Wittenberg. The doors have been replaced several times since that Halloween in 1517, and the church itself was rebuilt after it burned to the ground in 1760. The current doors were put there for Luther’s 375th birthday, in 1858. They’re made of bronze, weigh 1,000kg each, and have the theses inscribed on them. Luther himself was buried here in 1546. The monastery in which he studied, worked, lived as a monk and later as a family man (and owner) is now the Lutherhaus, the world’s foremost museum devoted to the man. 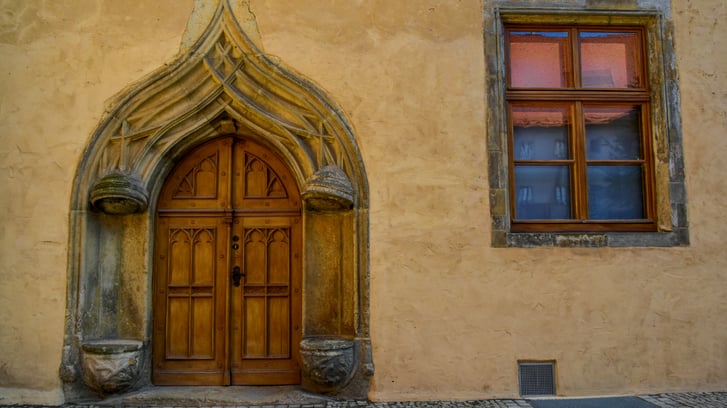 A little farther east along the Elbe is Meissen, famous for being the first place outside of Asia to figure out how to make what’s known as hard-paste porcelain. Meissen has been making the world’s highest-quality porcelain since the early 18th-century in the same factory you can visit today. None of it’s cheap, not even the souvenirs, and famous patterns, like the Swan Service first fired in the mid-18th century, can run into the thousands. Meissen is also where one of Europe’s smallest cathedrals is, tucked up against the pre-existing Albrechtsburg castle which together cast a magnificent reflection when the Elbe is calm. 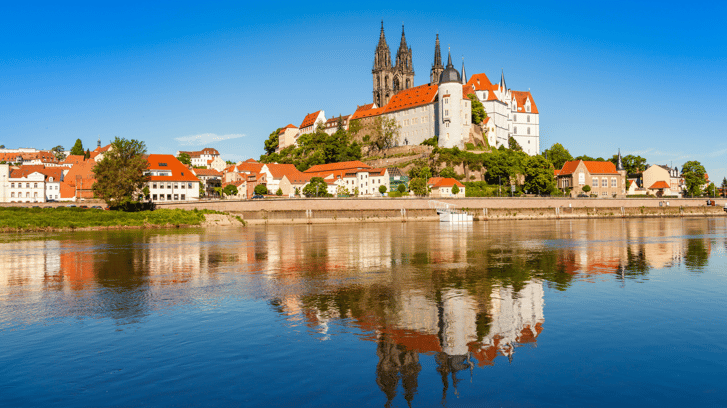 Dawn at Albrechtsburg castle on the Elbe

About an hour and a half downriver is one of the great cultural treasures and tragedies of modern Europe. Before Valentine’s Day, 1945, Dresden was one of the most beautiful and culturally significant cities on the continent, mentioned in the same breath as Florence, Venice, and Paris. The decision to utterly destroy a city of such limited military importance when the end of the war was already so clearly in sight is controversial to this day. Though much has been reconstructed, including the famous Lutheran Frauenkirche, you can see evidence of Dresden’s status as an eastern German city in the several Soviet-era apartment buildings that now stand in the middle of the old town.

Dresden has spent the last couple of decades trying to recapture its status, however, and a visit to any of the 12 museums in the Dresden State Art Collections (Stätlichen Kunstsammlungen Dresden) will give you an idea of how well they’ve been doing.

Once you’ve walked these once-destroyed streets and contemplated the nature of war, history, destruction, and reconstruction, maybe take a walk east along the Elbe to the Waldschloßchenbrücke that crosses it. You can stand in the middle and look back over the city from this new bridge, opened in 2013, that caused UNESCO, after all of Dresden’s efforts to rebuild its baroque skyline, to remove it from its World Heritage list, saying its four-lane, utilitarian modernity ruins the cityscape. 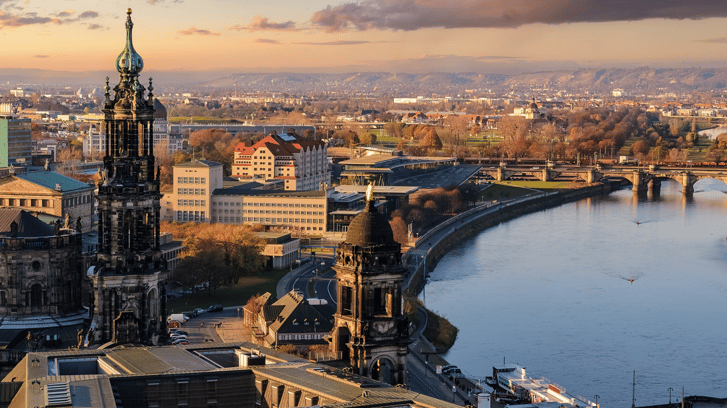 The city of Dresden

Like much of Elben Germany, Dresden has had to come to terms with a post-war history a good deal more complicated than the rest of Western Europe. It’s easy to forget much of the 20th century when you walk through the narrow streets of Nuremberg or among the many Roman ruins in Trier. Along the Elbe, it’s not so easy, and in that respect, in addition to what Otto and his family got up to around here, you could say this is where the real heart of Germany lies.

For what it’s worth, the people of Dresden don’t seem to mind the bridge much – they voted in favour of building it by a two-thirds majority.

What do you think?

Don't miss your opportunity to cruise the Elbe from Berlin to Prague, as part of an exclusive Canadian escorted departure! Hit the button below to get all the details: