4 Things You Should Know About The Northern Lights

Some people call it aurora borealis; others refer to Mother Earth’s colourful light show as the Northern Lights. This experience is magnetic – it mesmerizes all who see the luminous bands of green and purple. Many people will never have the chance to see this natural phenomenon, but those who are ready to make the journey to the Arctic Circle are in for a life-altering experience.

1. What are the Northern Lights?

The Northern Lights are a natural physical phenomenon created by solar wind that is stronger than normal as various electrically charged particles from the sun hurtle towards the Earth. When these particles collide with one another, they create bands of light that flit and pulse dramatically across the sky. The waxing and waning auroral lights generally present themselves in colours of green and pink, though they sometimes can been seen in red, purple, blue, and yellow, and come in various forms: some appear in scattered patches like clouds while others twist, ripple, and stream in rays and arcs. At their most active, the Northern Lights may explode for a few brief moments to create a breathtaking corona.

The sun is the foundation of the display – its magnetic fields curve and contort as it rotates on it axis, and these fields become entangled to create sunspots. The sunspots typically come in sets of two, with one on each polar end, and out of each of these spots particles from our bubbling, boiling parent star are able to escape.

When they escape, the particles cause solar winds that spew particles of plasma toward the Earth’s atmosphere, where magnetic forces pull them toward the North Pole. Here, they interact with the atmosphere’s upper layers, creating and releasing energy in the form of radiant, dancing lights about 60 miles overhead. The colours displayed reflect the types of gases that the energized particles are interacting with – when they meet oxygen, they form green and yellow. Purple, red, and blue are often spurred from collisions with nitrogen. Aurora borealis is visible from higher latitudes closer to the Arctic. But, you can’t stand just anywhere on the Northern Hemisphere to catch an eyeful – the dazzling lights are contained in what is known as the aurora oval and are at their most brilliant when directly overhead. Alaska and Canada offer the best-quality views of the Northern Lights. However, the journey to these viewing points can be long and grueling. Sweden, Finland, and Norway offer the most opportunities for views of aurora borealis. Tromsø, Norway, is located in the center of the Magnetic North Pole and is one of the best places in the world for viewing the northern lights because the closer you are to Earth’s Magnetic North Pole, the more vibrant the spectacle of the northern lights will be. 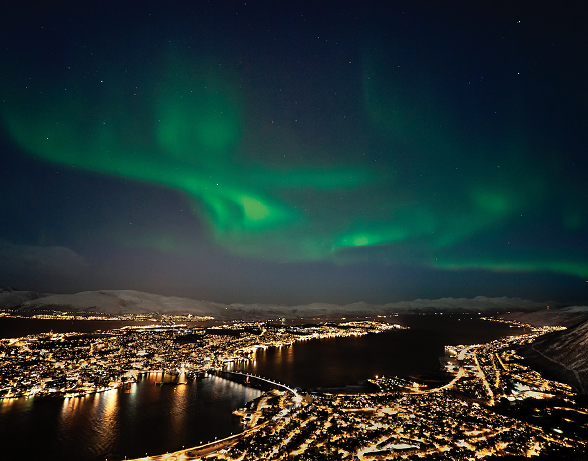 4. When should I look for them?

Winter at around midnight (local time) is typically the best time to see the lights, as low levels of light pollution during this season lend themselves to clearer skies. The aurora is at its most active up two days after a burst in sunspot activity, which tends to cause a more vigorous and brilliant show. While the best time to view the northern lights is fairly easy to predict, it’s important to keep in mind that only nature can determine the precise time that the phenomenon will occur. Factors such as clouds and high fog can also hinder one’s ability to catch a glimpse of the famed northern lights. For that reason, it’s best to plan on staying in your destination at least a week. 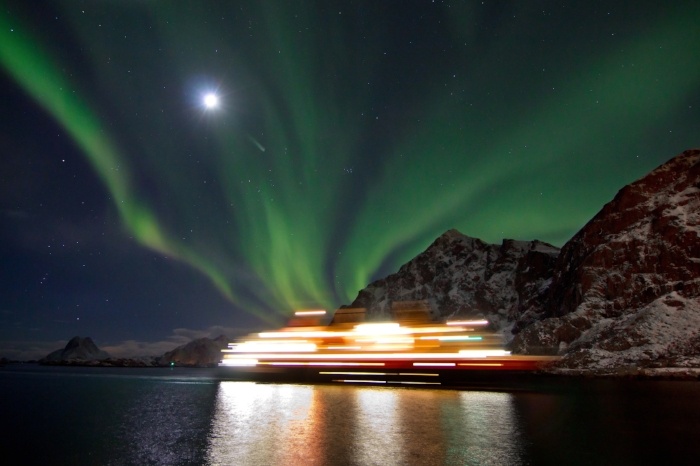 Fun fact: the first known writings about the aurora lights date back to the 2nd millennium BC in China.

Ready to experience Earth’s most mesmerizing mystery in person? No trip to the Arctic is complete without seeing the Northern Lights – so we’re making a you promise.

From the GLP team

«A Guide To Eating & Drinking In Thailand
22 Things To See On A River Cruise In Asia»
Looking for your next adventure? Discover the world's wildest destinations in the Expedition Travel Guide: